Filippo e Laura, who own the Villa and manage Residenza Torre de’ Lari, are proud to illustrate some of facilities made available for their guests. 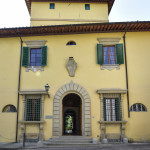 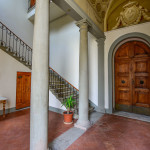 from the main door in via delle Campora (n. 30), the entrance hall opens over the monumental staircase through two most elegant pietra serena columns. Its decorations are simple. They have been frescoed during the XIX century with both the Fossi family’s emblem, which stands out on the main door of the Salone Strozzi, and signs, showed by recent restorations, of a more ancient and more committed decoration which repeats the perspective of a colonnade. 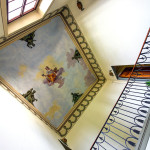 which leads to the noble floor through four pietra serena flights of stairs, takes light from two big windows open over the Arcetri’s landscape. The ceiling shows frescoes of four figures, classically dressed, surrounding a central figure which represents a young woman holding a switched-on lamp. This image stands for the Surveillance she offers to guests, and she’s flanked by a white crane which is symbolically committed to support a large stone, in order to not to fall asleep. This image is also flanked by the Allegrezza (literally Exhilaration), which pours the divine nectar, by the Hospitality, which opens her arms in a welcoming gesture, by the Peace, in an act to protect an olive branch, and by the Friendship, which offers the grains of the Punic apple. 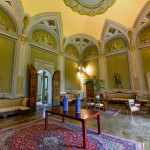 is the epicenter of the beautiful suburban farm of the ancestral family, a large area which connects the two façades similarly principal of the villa – Carnesecchi on the west garden and Strozzi Machiavelli on via delle Campora – and intersects “the other two” lateral façades: the one over the Verziere – now entrance of the Lari’s Tower “Residence” – and the other one over the vegetable garden at midday. It is a truly “Ballroom” decorated with festive trophies panoply and plumed flabella, and it opens over the Giardino a Ponente (west garden), hence over the obsolete grassy viale leading to the Marignolle villa. The Salone is built over the impressive wine-cellars and oil mill’s rooms which had reason to exist and life from the contiguous farms and which are still full of fascination, available to resume their lives for special occasions. 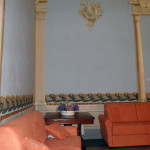 also called either the Room of Music or the Room of Arts, for its elegant frescoes of trophy panoplies located in the center of the walls, represents the fitting tribute to the first wife of Lorenzo Strozzi, who inspired and became patron of the villa’s great restorations. As decorous expansion of the Ballroom, the Machiavelli Sala admirably fulfills the role of music room and the new role of domestic Library, or Reading Room, and Living Room. 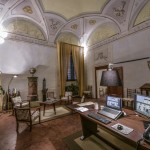 with two big windows – over the verziere and via delle Campora – keeps the position of a valuable terracotta stove, which is still in use. The room is now the Residenza’s Front Office for the initial guest services and the waiting area for arrivals and departures. A table and two cupboards designed by Staude for his dining room are located here. 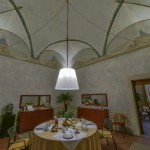 also known as Spouses’ Room for the two fluttering doves frescoed in the center of the vault, is mainly used for breakfast in the morning and for possible receptions and buffet refreshments favored by the proximity of a modern and highly efficient service kitchen. For this reason, the room was furnished with a large central table and two varnished ‘cupboards’ already existing in the villa’s furnishing. 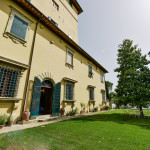 the garden is organized in the Italian style, with big lemon trees festively placed in the ancient terracotta-imprunetina (from the Impruneta’s area) pots and a monumental magnolia, which offers a comfortable shelter for relaxation. At south, the garden includes the charming Limonaia’s Gazebo – a delightful Jardin d’Hiver – which, during the warmer seasons, becomes meeting point for outdoor receptions. On the opposite side there is the domestic Peschiera, recently turned into a modern and highly efficient swimming pool with a large solarium allowing to comfortably enjoy the afternoon heat. 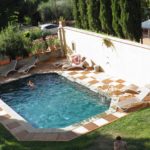 Our historic home has an outdoor pool, available to guests from May until the middle of October, located in the Italian garden in the location of which guarantees a perfect exposure to the sun throughout the day. The pool is equipped with various water features: corner tub, swimming against the tide and fountain with neck massage. The pool is sanitized with sea salt ionized to eliminate the damaging effects of chlorine, so as to make better the well-being of our guests. Around the pool, available to guests for free, there are: a shower, sun loungers and bath towels, request from the reception.